Our friend Ruben Alonso visit the city of Mostar and he show the Mostar bridge destruction.

Mostar is a city and municipality in Bosnia and Herzegovina, the most important of Herzegovina, in the center of the Herzegovina-Neretva Canton.

The bridge was destroyed by units of the Croatian Defence Council during the Bosnian war, on November 9, 1993 at 10:15 am.

Slobodan Praljak, the commander of Croatian forces, was tried by the ICTY for ordering the destruction and other charges.

Mostar is a city of Bosnia and Herzegovina, the most important of Herzegovina, in the center of the Herzegovina-Neretva Canton. It is situated on the Neretva River and is the fifth largest city in the country.

Thanks Ruben Alonso for write to us and send this video about the city of Mostar. Surely he will continue sending us new stories from Balkans Countries. 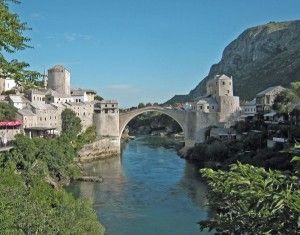 Mostar is also widely celebrated folk traditions and appears frequently as the setting for books, movies and TV shows.