This guide include practical information about Greece and it will give you good advice if you are planning holidays to this exotic destination in southeastern Europe. Greece is a country with several neighbors. In the north, Greece is bordered by Macedonia, Albania and Bulgaria. Turkey borders Greece to the east, the Ionian Sea in the west and south the Mediterranean. Greece also is considered as the “Cradle of Western Civilization. “If you visit Greece, you will be spellbound by the amazing architecture of the buildings, the site’s natural beauty and excellent Greek culinary delights.

Passport and Visa for Greece
Greece is a member of the Schengen Agreement, and if you are from any of the countries that have this agreement, you do not need a visa to enter Greece. If you are a U.S. citizen, you have to apply for a visa before arrival in Greece, it will give you a 90 day visa on arrival. However, you really have to have a valid passport to enter Greece. If you are from any other country, you must have a valid passport and a visa will be asked in the Greek embassy or consulate in your country so you can enter Greece.

The Euro (€) is the currency used in Greece. If you are from USA, Canada, the United Kingdom or any country that does not use the Euro, you have to change your money in Euros to go to Greece. You can change your money before the arrival in Greece, or you can change money at the airport or at banks in Greece. The exchange rate for 1 euro is about $ 1.20, this however, may be subject to change.
Weather Greece

Most of the population in Greece spoke Greek as their only language. There are other languages that are spoken in Greece, such as Bulgarian, Turkish and Romani. On the northern border of Greece, some people speak the Slavic language.

Embassy of Greece in the main Spanish-speaking countries: 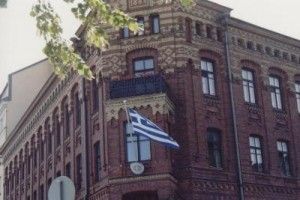 Embassy of Greece in Spain Madrid:

Embassy of Greece in Venezuela: