The following list contains the best places to travel and visit in Montenegro:

The picturesque city walled of Kotor is located just in the deepest fjord of southern Europe that has the landscape more injured of Montenegro.  The city of Kotor, Montenegro is Located along one of the most beautiful bays of Montenegro. Kotor is a city of merchants and famous sailors, with many histories to tell. The Old City of Kotor is an urbanization well conserved typical of the Middle Ages, built between the centuries 12 and 17.  The medieval architecture and the numerous monuments of cultural inheritance have done Kotor a city catalogued by the UNESCO as “the World Natural and Historic Place of Inheritance”.

Podgorica is the commercial official center and cultural of Montenegro.  The name originates from the year 1326.  Podgorica, Montenegro is a town that was built among five rivers, the Zed, Moraca, Ribnica, Cijevna and Sitnica.  Most of the city of Podgorica, Montenegro was destroyed during World War Two, then Podgorica is relatively new, with modern buildings all over and many green spaces and parks. Podgorica receives a number of cultural events and there are many theaters, like Crnogorsko Narodno, Gradsko and Dodest. The most cultural and historic Monuments around Podgorica are Sahat-kula Adzi-Passes Osmanagica, the ruins of Graduate Nemanjica, remainders of the city of Doclea, Stara Varos, and Vezirov.  Podgorica has connections of excellent traffic with other centers.  Nine kilometers away of the city is located the International Airport, with the railroad and terminals of buses the one near the other. 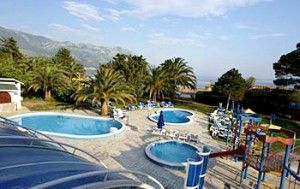 Berane is surrounded by high lands.  On this region they came a civilization after another and they were forgetting the rich cultural inheritance.  Nevertheless the Turks did the fortress in 1862 and this part of Montenegro in 1912 was done.  Berane is a young city. Its streets are extensive and they are decorated by squares and parks.  Near the city there is a tow lift that conducts to the ski run in Skrivena and Smiljevica.  The city is oriented to the tourism of winter but the large number of archaeological places make it attraction as a great tourist offering of Montenegro.  The Monastery Djurdjevi stupovi where the Holy Sava founded the first episcope represents the monuments more important historic and cultural of Berane, Montenegro.

In the west of Montenegro, in the country of Niksic, is the city of Niksic that was built in the century IV when its original name was Onogost.  The remainders of this old city are today a cultural and historic monument.  In the outskirts of Niksic in Montenegro, going in direction to Podgorica, high in the rocks, we find the major spiritual center of Montenegro, the Monastery of Ostrog.  It based on century 12 by Vasilijethat Metropolitan, that later was proclaimed the worker of the miracle and the Saint.  Today its relics are here and Ostrog is the Orthodox place and more visited Saint in all the countries Balkans.  In the city in itself we can find to the monumental Church Saborna, dedicated to the Holy Vasilije and surrounded by a beautiful park.  Niksic is next to three lakes:  Krupac, Slano and Lake Liverovici.  During the months of summer these lakes are the main places for holidays-makers and hikers.  Niksic is also known by its production of the famous beer Niksicko.