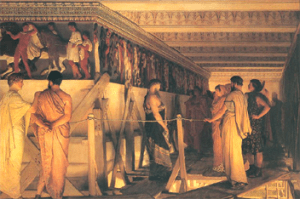 Greece reached the peak of its glory in the V century BC, but the Peloponnesian War (431-404 BC) weakened the nation, and was conquered by Philip II and his son Alexander the Great of Macedonia, who considered the same as the Greek. Continuing the story of Greece we find that in the middle of the second century BC, Greece had fallen to just been a Roman province. So the history of Greece tells us that Greece remained within the Eastern Roman Empire until Constantinople fell to the Crusaders in 1204. In 1453 of the history of Greece, the Turks took Constantinople and by the year 1460, Greece was just a province in the Ottoman Empire. Greek war for independence began in 1821 and around 1827 Greece had gained independence with sovereignty guaranteed by Britain, France and Russia. This event in the history of Greece is celebrated to these days.

More information about the the history of Greece.

Protection authorities chose Prince Otto of Bavaria as the first king of modern Greece in 1832 to reign over an area only slightly larger than the Peloponnese peninsula. Mainly under the next king, George, chosen by the powers of protection in 1863, Greece acquired most of its present territory. During his reign of 57 years, a period in which he was commissioned to encourage parliamentary democracy, Thessaly, Epirus, Macedonia, Crete, and most of the Aegean islands were added from the Turkish Empire disintegrated. But in the history of Greece also had adverse economic conditions that forced about one-sixth of the entire Greek population to emigrate (mostly U.S.) in the late 19’s and early 20. An unsuccessful war against Turkey after World War I toppled the monarchy in Greece, which was replaced by a republic in 1923 of the history of Greece.
The history of Greece and its long civil war:

Two military dictatorships and a financial crisis were to return the exiled King George II, but only until 1941, when Italian and German invaders conquered the Greek resistance. After British and Greek troops liberated the country in October 1944, Communist guerrillas staged a lengthy military campaign against the government, the Greek civil war, infamous for its brutality, began in December 1944 and continued until 16 October 1949, when Communist guerrillas conceded defeat. The Greek government received U.S. aid under the Truman Doctrine, the precursor of the Marshall Plan, which was to fight against the Communists, a fact that undoubtedly is well remembered in the history of Greece.
[ad#ad-336-280]

Finally in the history of Greece we can say that Greece was a founding partner of the United Nations and became a member of the Organization of the North Atlantic Treaty (NATO) in 1951. A military junta seized power in Greece in April 1967, sending the young King Constantine II to exile. Colonel George Papadopoulos, leader of the board, tried to gradually change its image from right-wing hardliners but fortunately for the history of Greece Papadopoulos a coup ousted in November 1973.