More information about the history of Serbia:
Continuing the story of the history of Serbia we can say that the First World War began when a Serbian nationalist assassinated Archduke Franz Ferdinand of Austria in 1914, which led to the declaration of war by Austria against Serbia. Within months, most of Europe was at war. A sad fact in the history of Serbia. In the aftermath of the war, Serbia became part of the Kingdom of Serbs, Croats, and Slovenes (1918). This fact Serbia’s history included the former kingdoms of Serbia and Montenegro, Bosnia-Herzegovina, Croatia, Slovenia, a semiautonomous region of Hungary, and Dalmatia.

Serbia’s history in the twentieth century:

Finally we show on the history of Serbia that Paul brought a policy in favor of the shaft to Yugoslavia to sign the Axis Pact on 25 March 1941, but opponents overthrew the government two days later. Continuing the story of Serbia can say that on April 6, the Nazis occupied the country, and the young king and his government fled. Obviously this was an unfortunate event in the history of Serbia. Two guerrilla armies – the Chetniks under Draza Mihajlovic supported the monarchy and the Partisans under the command of Tito (Josip Broz) support to the Soviet Union and fought the Nazis throughout World War II. In 1943, Tito established a provisional government, and in 1945 he won the federal election while the monarchists boycotted the vote.
But the history of Serbia continued and we found that the monarchy was abolished and the Communist Federal Republic of the people of Yugoslavia, with Tito as prime minister was created and designed. Tito ruthlessly eliminated opposition and broke with the Soviet bloc in 1948. Yugoslavia followed a middle way, combining orthodox Communist political control and the use of an overall economic policy and complete with a varying degree of freedom in the arts, travel, and sole proprietorships.
Tito became president in 1953 and was named president for life in the revised constitution of 1963. 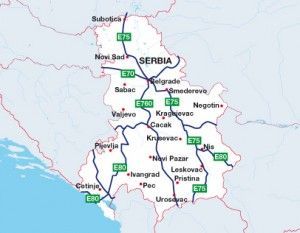