The best places to travel and visit in Macedonia can be found in the following list:

Skopje is the capital and the largest city of the Republic of Macedonia with approximately a third of the total population.  Skopje is the economic, academic, cultural, political center of the country.  Skopje is known since the Roman period under the name of Scupi.

The territory of Skopje modern has been inhabited since at least 4000 years before Christ; the remainders of Neolithic establishments have been found inside the old Fortress of Cabbage that passes for high the center of the modern city.  The establishment seems to have founded then by the Paionians, that were people that inhabited the region.  In 148 bc the city was done part of the Roman province of Macedonia, established in 146 AC.

In the Old City of Skopje they can be found the Kursumli (of the century XVI) and the Suli (the fifteenth century) caravanserais and the Daut Pasha Baths with their two large and 11 small domes.  All they now function like houses of art gallery.  There is a number of mosques that date from the Ottoman period, particularly of the fifteenth century we can find the mosque Mustafa Pasha, as well as the old Fortress of curly Cabbage of century XV and a magnificent runway that crosses the River Vardar.  Near Skopje is the Monastery Nerezi that accompanies to the Church of the century XII of the San Pantelejmon that stores fresh magnificent Byzantine.

Bitola is located to 18km (11 miles) of the Greek border, Bitola is the second larger city in (the Old Yugoslavian Republic) Macedonia.  This was an important center of Ottoman rule and has the nearby ruins of the old city of Heraclea. 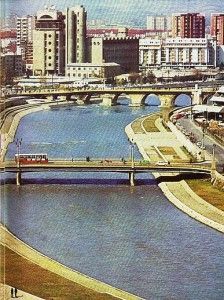 Ohrid is situated on the Lake Ohrid.  Ohrid is probably the most attractive city in Macedonia (the Old Yugoslavian Republic).  Here San Clement of Ohrid put the foundations of the first Slav university.  In the centuries 10th and 11th , Ohrid the capital of the Macedonian Czar was done Samuil.  The walls of their fortress still survive and now provide a place for concerts of summer, operas and play.  Near the old fortress they are the remainders of a Classical theater.  Strolling around the beautiful city of Ohrid there is a number of old churches, particularly the Cathedral of Santa Sophia that contains some fresh of 11th century that are really magnificent.