Getting there and around Macedonia:

We provide useful information below to get to Macedonia:

With the release and breakdown of JAT Yugoslav Airlines, a number of local companies have emerged offering direct flights from Skopje to cities in Germany, Switzerland and the Netherlands. There is also an international airport in Ohrid.
The airport departure tax can not be included in the airfare.

The international bus terminal in Macedonia in Skopje has buses that travel to Sofia, Tirana, Istanbul and Belgrade Munich daily and twice a week. And from Albania, you can travel between Tetovo and Tirana by bus or walk across the border at Sveti Naum near Ohrid.

In Macedonia there are express trains that come five times a day and go from Skopje to Belgrade, via a town called Nis.
Macedonia trains run twice a day to join Skopje and Thessaloniki.
If you are interested in further trips like going to Greece, it is best to buy a ticket only to Thessaloniki and then get the other in Athens.
There is no direct rail link between Macedonia and Bulgaria, and the train is not recommended for travel between Sofia and Skopje because you are forced to change trains in Serbia. 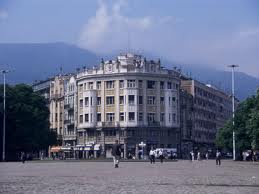 Bus trips are well developed in Macedonia with frequent services to Skopje to Ohrid, Bitola, Tetovo and major regional cities of Macedonia.
In the summer you need to buy tickets to Ohrid a day or two in advance because they are fully booked in Macedonia because it is the high season of Macedonia.
Macedonia trains are quaint, inexpensive and have wonderful views of landscapes of Macedonia. The train from Skopje to Bitola, takes four hours to cover 230km (140mi.)

U.S. citizens, Canadians, European Union and Yugoslavian passport holders require no visa to enter Macedonia.
Australians can buy a visa at the airport of Skopje Petrovec, but have to get in advance of entry by land to Macedonia.
The situation changes regularly, so check with the Ministry of Foreign Affairs Macedonian, Macedonia.