The following list described the best places to visit in Moldova:

Chisinau is the capital of Moldova (previously was Kishinev) Chisinau is standing on the edges of the small River Byk.  The city of Chisinau was founded around the year 1470 and the history and the life of Moldova during the centuries is very well represented in the History and the Regional Museum of Lore, a complex of very beautiful Turkish Style.  The museum of Fine Arts harbors very good examples of paintings, sculptures and arts applied of Russia, Europe and of the Western zone of Moldova.
The House Pushkin is the place where the great russian poet passed his days in the exile among 1820-23.  The museum is famous like the place where Pushkin began to work on its epic poem Eugene Onegin.

There are also two old cemeteries in Kishinev, the armenian Cemetery and the Jewish Cemetery.  This last one is famous like the place of the burial of the victims of Kishinev Pogrom in 1903; in the years 1960, the lower part of the cemetery deliberately was devastated by the authorities.  Due to the emigration massive bean of Moldova during the years 1980 and principles of the years 1990, the state of the cemetery has deteriorated considerably.  The only synagogue in current operation in Kishinev which is situated not far from the center of the city, on Habad-Liubavici str.
The old Choir Synagogue of Kishinev nowadays become the Theater of Drama Chekhov.

The Monument of Stefan cel Mare (Stefan the Large one) is situated in the entrance to the well cared for Park of Pushkin.  He was the Gospodar (sovereign) of Moldova among 1457-1504 during a time of brief independence of the pies, thus a special place in the history could be assured of Moldova.  The monument was carried out by the sculptor Plamadeala in 1927.  In 1990-91, the monument was the focus of meetings and violent collisions between the Nationalists of Moldova and followers in favor of the Soviets. Just out of the park there is an impressive building that stores the largest cinema which is called Fatherland, that was built in 1947 by german war prisoners.
Picturesque beaches with spas can be found around the artificial lake manmade Chisinau (previously called lake Komsomol).  The ships can also be rented in that lake.  The complex is divided into two parts: the exposition of Achievements and the green Theater outdoors with capacity to harbor to 7000 spectators.

Other Tourist cities in Moldova:

Situated 70km (44 miles) of Kishinev we can find the city of Tiraspol, that was founded in 1792 that by then was a Russian border.  Tiraspol has nowadays a population of some 200.000 inhabitants and is one of the main industrial centers of the country.

Tiraspol is also the capital of the Republic car proclaimed of Transdniestria and they advise that travelers avoid it due to the unstable political situation.  Benderi (Tighina) is one of the oldest cities in Moldova.  Their fortress of the century 17 that is really beautiful, as thus also the city in itself, seriously they were damaged during a recent fight.
Balti 150km (94 miles) to the north of the capital is an industrial main center.  The main products of this area are the sugar, oils of vegetables and fur coats.

Approximately 160km (100 miles) to the south of Kishinev is Cahul.  The city is famous for its thermal spas and processing of mud and there is a small hotel in the city.
There is also a very good local Theater.  Hirjauca is a renowned spa in the area.
Moldova is a country that cultivates wine and the vineyards and the wine cellars of Mileshti and Krikova-Veki are famous all over the region. 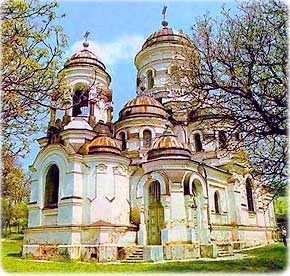