Found corpse of a suspected vampire

The truth about vampires is far from romantic legend. This has been evident in Bulgaria, where the discovery of the tomb of an alleged “blood drinker” has revealed its links with some pre-Christian pagan customs of the Balkans. 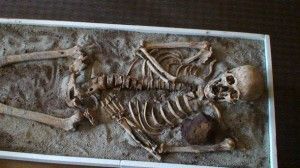 The discovery, made last Sunday about a medieval monastery in the small town of Sozopol on the Black Sea, shows a man who had been buried with an iron nail in the heart, told Efe director of the National Museum history, Bozhidar Dimitrov.

“The dead man, whose identity, origin or social status have not yet confirmed, had stuck in his chest a piece of iron plow”, said Dimitrov, a Bulgarian former minister and one of the country’s most celebrated historians.

This discovery, which dates back as early indications VIII or IX century, reveals a pagan custom that then subsisted among Christians of the time and that was through the hearts of some who died with a metal blade to not return from the dead .

“They practiced this rite against people in his life were considered evil, evil made ​​against people or just dealing with something that society did not understand, such as scientific or medical research. It was believed that after death, such persons became vampires and tortured and tormented the living and drank their blood, “he said.

The alleged vampire could be a person of high social status, perhaps a mayor, a tax collector, a counselor or a priest rigorous in its pursuit of violators of Christian morality.