Aegina in Greece is one of the greek islands in the middle of the Saronic Gulf, between the islands of Salamis to the north, west and Poros Angistri south, lies ten kilometers to the northeast coast of the peninsula of methano, in the Peloponnese, and southwest of Piraeus port which is about 20 kms. The adjective of the inhabitants of the island Aegina in Greece is Aeginetan.
Aegina in Greece is famous for its temple of Aphaia, one of the three temples of the sacred triangle formed by the Parthenon, the Temple of Poseidon Cape Sounion and the Temple of Aphaia. It was long a rival of Athens, both in antiquity and the early nineteenth century.
Aegina in Greece was one of the first cities sea and traders of Ancient Greece: has the first marina in Greece and was the first city to mint money.
It was the first capital (1828-1829) of Greece who fought for independence and the young Greek state made it first coins minted there. Aegina in Greece is also the largest producer of pistachios in Greece, and the largest exporter worldwide. According to tradition it is considered that its name derives from the nymph Aegina, the mother of Aeacus, who was born on the island and was its King.

The highlight of Aegina in Greece.
The harbor in Aegina in Greece is very picturesque with its chapel, its ancient houses, the boats of fishermen and bustle of strollers. The city has an Archaeological Museum and some archaeological remains of importance among which the Colona or column of the ancient temple of Apollo. Near the town is the church of San Teodoro, with important frescoes of the thirteenth century. In Aegina in Greece you can visit the monastery of Agios Nectarios, which meets in special dates to a large number of devotees, and we also know Paleochora, the medieval town, now in ruins, built defensive from hackers. From Aegina in Greece you can perform various tours, including the one leading to the Temple of Afea, 11 km. east, Doric and built after the naval battle of Salamis. You can also visit the famous resort of Santa Marina, 3.5 kms.In Aegina on Greece you can enjoy home cooking and bread baked in a wood oven in the tavern Vatsoulias.

[nggallery id=3 template=carousel images=4]
The beaches of Aegina in Greece
In the northen coasts and Vaia Subala stand. In the west the most famous are those of Lighthouses and Marathon
How to get to Aegina in Greece.

Aegina in Greece is only 16 nautical miles from Piraeus and takes barely an hour and half in a ferryboat.
Some places for stay in Aegina:
Hotel Rachel 2 stars – Kiriakou Galari street 188 Agia Marina, Aegina, 18010
If you choose to stay at the hotel Rachel will have the opportunity to combine a vacation in a quiet and peaceful island with a visit to the great and historic monuments and views of Aegina and Athens.
Aktaion II Hotel 3 stars – Scala. Agistri, 18010 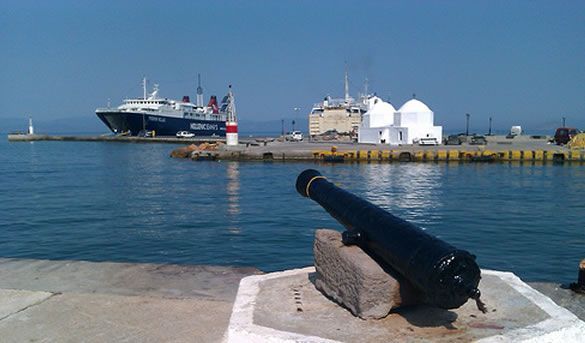 The Hotel is almost new and is very close to the beach. Aktaion II only have 4 apartments.
Hotel Rastoni 3 stars – Stratigou Dimitri Petriti , Aegina, 18010
This is another small Hotel with only 12 rooms.