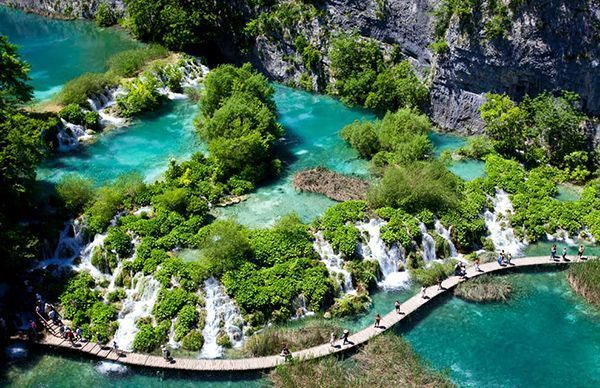 The Plitvice Lake Natioanal Park in Croatia has 30.000 acres of unspoiled nature. If you choose to visit during the week, in the morning first thing when the “population” of tourists is lower, the contemplation of the biggest waterfall in the park, 76 meter free fall, or beech forests produce an effect of peace that we can hardly reach tourists altering the silence.In panels Plitvice park entrance is the most frequent word travertine. It refers to the miracle that turns the moss rock is deposited as lime water and lime.

Plitvice Lakes National Park in Croatia is mostly beech (75%), but not so much fir and pine. In addition, yellow toads, a handful of lynx, deer and tawny.

The 16 resulting lakes are baptized according to the legends have drowned in its waters. One is the lake of Gypsy, another that of Grandma, there is the Shepherd’s Mile, and closer, the greatest of all, that of the Goats. It has 2.5 miles long, a distance more than reasonable to sink the 30 goats optimism that relied too much on the strength of the ice to escape the wolves. With utmost care, it is now possible to cross by boat. 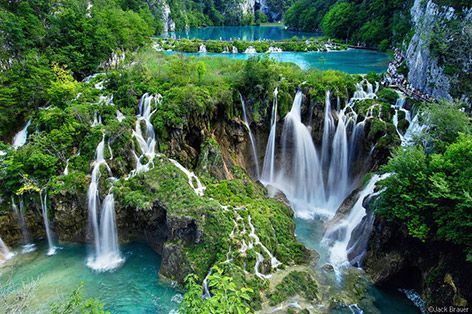 Under these pools are also jewelry like crayfish Astacus astacus, the material used to coat his shell limestone becoming more stone. And the Proteus, a rare salamander that lives only through these caves, without eyes and without any pigmentation.

Today has regained its splendor of Eden, despite having become another hell during the war when Serbian guerrillas kidnapped the park and they threatened to blow up the Plitvice Lake National Park in Croatia. Red has never been a dominant color palette showing the wide waters of Plitvice.
The color of Plivtice Lakes National Park in Croatia, can go from gray to the transparent turquoise Caribbean beach.
The water changes color from hour to hour and from shore to shore. Everything depends on a thousand factors, including the amount of minerals and organisms of the deep, rain, moss or angle of light.